One of the cornerstones of NEW AGE believe system is “All  has a frequency” (even Jesus) and consequently “Every disease can be set right if you just apply the right frequency”.

This  idea is heavily made use of by the “Classical Rife-Therapy Church” and its split-off the “Hulda Clark sect”. Their sacred tools that make it possible to find the magic frequencies that are missing or that can kill the bad bacteria that are the trouble makers are the F-Scan, the Syncrometer, the Vega-test or for the moor poor brothers the Aurameter or another simple biotensor that are all just pendulum with a high tech believe system attached to them.

It is strange how such a simplistic system could keep its head over water for so long and certainly it is one of the reasons why anyone with even basic physics knowledge thinks that these Rife-apostles are not even worth a comment. Obviously for the other side Rife and frequency therapy that clings to the Frequency – Disease relationship this form of therapy had many great healing successes – but I want to show here that this is certainly not based on the idea that CERTAIN diseases could be fixed by application of CERTAIN frequencies. Obviously this is just allopathic energy medicine that holds instead of “certain drugs” it would be “certain frequencies” that are the key to healing.

“In case no-one has previously noticed, some of the Rife frequencies on the CoRe are at odds with the handbook.
They are fine at the beginning but they are seriously awry by ‘S’.  Looking for the Schumann Resonance frequency, I came across a number of unfamiliar frequencies.  Further down the screen, the correct frequency of 7.83 was assigned to Sleeping Sickness.
Hopefully these can be amended so energy can follow information.”

With the Handbook I guess he means Nina Silvers “Rife Handbook, The Handbook of Rife Frequency Healing”

I have to say that in our Inergetix beginning somebody ordered a few hundred copies and so we were giving one with every system that we shipped – however now I am glad we have grown up and run out of stock.

What is “holistic” of preaching that defined frequencies would be healing for defined diseases – this it the opposite of what it means to be “Holistic”. Why should a frequency that somebody saw working years ago in one person should be equally useful now in a different person that has just been given the same disease name ? This kind of childish idea that is preached since 50 years and absorbed by desperately sick people and turned into sales by others is the reason that most companies that have come into conflict with the FDA were exactly abusing this notion.

And we are all kept frightened by the devastating effects of Frequencies on our lives :

– last change for training before 2012 (then you have to know how to deal with the super-high frequencies that whole humanity will be blessed with http://www.transferencehealing.com/events/index/2311/8/events/australia-nsw-international-conference

This is one of the most absurd ideas that one frequency be it Schumann, Nogier, Solfeggio, can do miracles maybe because Pavarotti used it a lot of Horowitz wrote a book about it. The idea of single numbers, single ways to salvation, single answers, single reasons appeals to the left brain that is why it will be promoted as long as our cultural education is creating so much left-brain overemphasis.

If you look at a single word or a phrase like “How are You” with an acoustic Spectroscope you see that even this :

as I did here in this evaluation – So how could you imagine that CANCER can be cured by a few frequencies ?

The CoRe system and its philosophy goes much beyond such simplistic nonsense – the informational CoRe system finds resonant frequencies that are in the hundereds and that are changing from day to day. Even more sensibly the new LaesEr Bioresonance system finds resonant frequencies that when applied in minimal intensities of 1-3 Volt create very strong sensations – and certainly they are not the same for different people with the same symptoms – not even for the same person on different days.

And here you can see how I turn all this philosophy in usable software and technology : 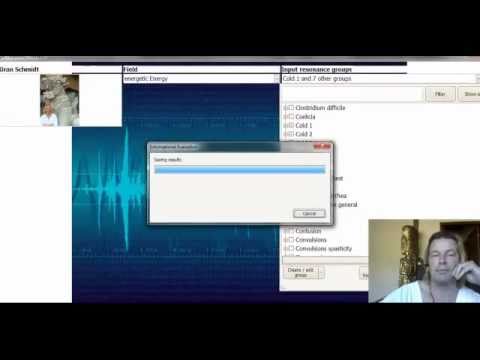 2 thoughts on “Everything has a frequency”